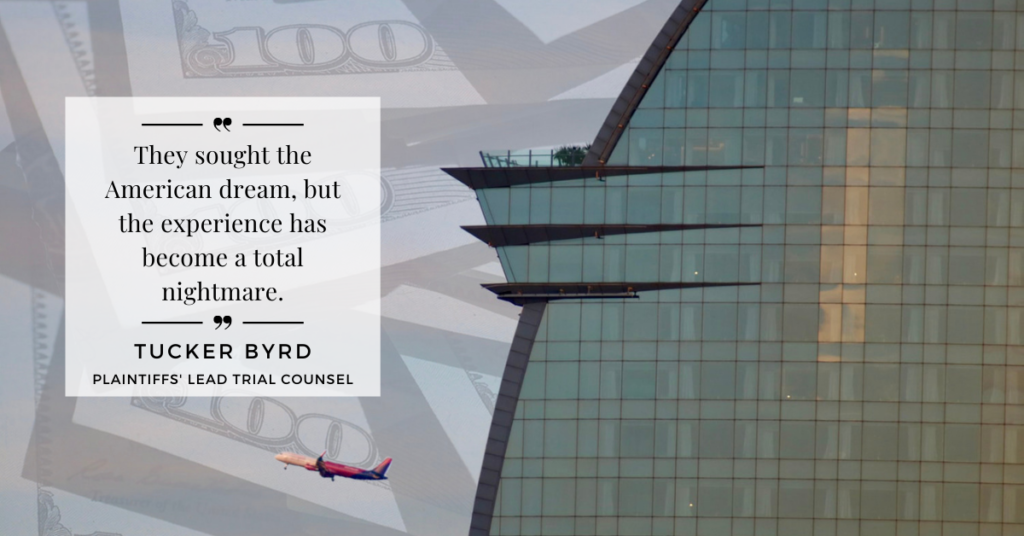 Byrd Campbell, long a champion of clients victimized by investment programs, has filed a lawsuit claiming its clients have suffered millions of dollars in damages as a result of a botched economic visa investment.  Three Vietnamese citizens had invested in the J.W. Marriott project as a precondition to seeking U.S. economic visas under the EB-5 program.  After making and having their investments accepted by the program manager, the investments were returned with instructions to resubmit the funds.  By then, however, the government’s qualifying investment requirements had dramatically increased, more than doubling the investment amount required.

Tucker Byrd, the Plaintiffs’ lead trial lawyer said, “They sought the American dream, but the experience has become a total nightmare.”   The investment project manager responded to the lawsuit publicly, saying that the original investments did not “comply with the applicable program requirements,” to which Byrd responded, “That makes no sense.  They accepted the funds, and my clients were on their way with applying for their visas.  Only later, for reasons still not explained, were the funds returned with a direct instruction to resubmit them.   Unfortunately, the damage had been done, as the minimum qualifying investments by law had more than doubled.”

Originally filed in federal court in Orlando, the lawsuit has been moved to the Florida state business court, the Honorable John E. Jordan, Circuit Judge presiding.