Skip to content
Home/News/FIVE THINGS NEVER TO DO IN A LAWSUIT!
Previous Next

FIVE THINGS NEVER TO DO IN A LAWSUIT! 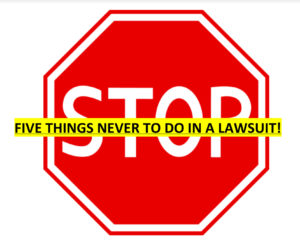 Lawsuits come in an almost endless variety of subjects, shapes, sizes, and flavors, but whether you are suing or being sued, my 36 years of trial experience have revealed certain immutable truths that apply to any lawsuit. Call them the “Five Things Never to do in a Lawsuit”:

Lawsuits, particularly commercial disputes, often involve parties who know each other intimately . . . maybe too well. Partners who know the foibles of each other, shareholders who know questionable tax practices of the officers, competitors who have discovered the illegal practices of each other, or disputing parties to a contract who know that a certain law or regulation was broken, often feel the urge to “rat out” their adversary.  In a misguided attempt to gain leverage, Parties may be tempted to threaten turning an opponent into law enforcement or a regulator, rather than simply doing it. This approach, deliciously tactical as it might seem, has one major problem—it’s probably highly illegal itself. Know this simple rule, even if your adversary broke the law, and I mean badly, you cannot threaten to turn them in unless they relent to your personal demands. It probably would be considered “extortion,” subject to criminal enforcement . . . against you! Before you threaten your adversary, ask your counsel.

Nothing draws the ire of courts more than the destruction of evidence which may have some bearing on a lawsuit. Even the name given to the destruction of evidence—“spoliation”—sounds every bit as bad as it is received by the courts. Whether intentionally trying to get rid of evidence, or simply tidying up your files in anticipation of a lawsuit, destroying evidence can mean only bad things for the perpetrator. The court will likely view it as an obstruction of justice, and at best, the action implies the perpetrator believed it was damaging. And here’s one more tip for the unwary: spoliation can include deleting electronic data. To matters even more embarrassing, electronic data almost never totally disappears. Even when deleted, it usually exists in some form on an electronic medium. Once discovered, the reclaimed evidence takes on an added, nasty meaning. The bottom line is this: do not destroy or delete anything leading up to, or during, a lawsuit, no matter how innocent or damaging you may perceive it is. Your worries may be unfounded, or the material may end up being protected from disclosure by a privilege anyway. Before you delete, ask your counsel.

A first cousin to the rule against communicating with third parties is the companion rule never to have side dialogues with the opponent. A great temptation often hangs over a lawsuit to “chat” about the lawsuit with the opponent, say, for example, with a former or current partner, customer, or competitor. Whether to clear the air, strike the fear of God in the opponent, or offer an apology that suing is “just business,” these communications can be devastating to a case. Invariably, someone says too much, or denies too little, and the discussion about the evidence of the case becomes evidence itself. A simple solution exists for this. Never have side dialogues with the opponent. Before you speak, ask your counsel.

This brings us to the fifth and final rule of “Nevers.” When a dispute arises, avoid the temptation to run out and get someone to indemnify you for the dispute about to unfold. The protection you gain by gaining someone’s backside protection has to be measured against the unintended inference that you may have admitted doing something wrong from which you needed to be protected. Enforcing indemnities already in place is one thing; seeking new protection in the middle of an active dispute is another. Before extracting an indemnity, ask your counsel.

There you have it, the “Five Things Never to do in a Lawsuit.” The rules exist because the temptations are great, and the consequences greater. Your emotions, or even a warped sense of logic, may convince you that breaking one of these rules can be justified.  The consequences, though, will teach you that these are five rules never made to be broken.

Litigate with heart, but a clear head, and before you break any of the “Never” rules, ask your counsel.