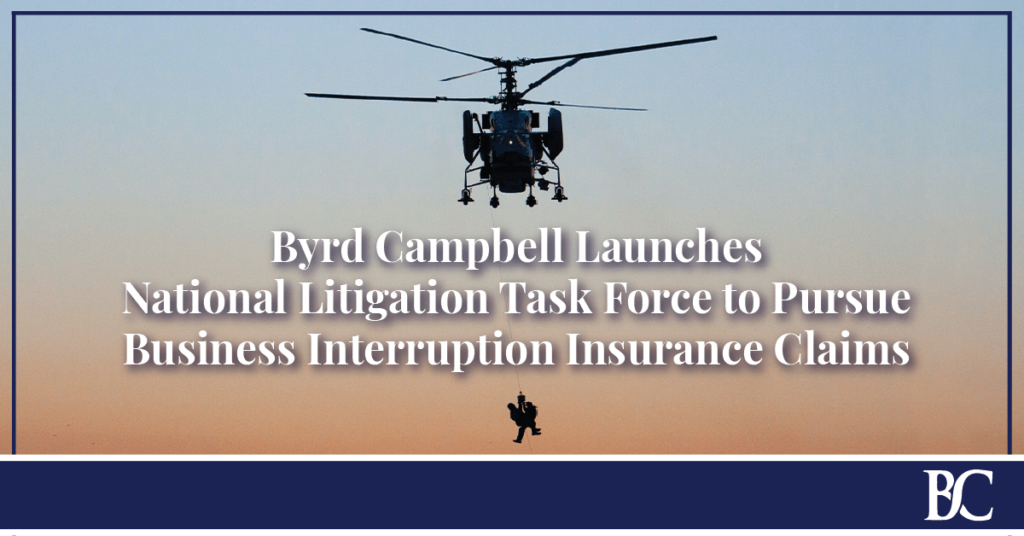 Byrd Campbell announces the launching of a national litigation task force dedicated to pursuing business interruption insurance claims. Given the economic devastation caused by the so-called “COVID-19 Crisis,” estimated to be $380 Billion a month, accountability to restore losses lies with many, including the insurance companies whose policies guard against this type of loss. In anticipation of an onslaught of claims, insurance companies have tried to draw the proverbial line in the sand to discourage insureds, unabashedly announcing they have no intention of paying claims, leaving insureds with little chance but to enlist the help of legal counsel to pursue their rights.

Battling insurance companies with infinite resources will require an equally formidable legal team, which served as the impetus to form the task force. Tucker Byrd, who leads Byrd Campbell, said this about the composition of the group:

“Like any championship team, we wanted those teammates who provide unique, elite skills at each position. We needed a firm with a national platform and found that in the Lerner & Rowe firm. We needed an acclaimed first-party insurance specialist, and found that in Alan Garfinkel. Finally, we knew Byrd Campbell could bring the business-centric focus to assist clients whose businesses were damaged. Most importantly, though, we wanted warriors. This team has that in abundance, and is stacked at all the important positions.”