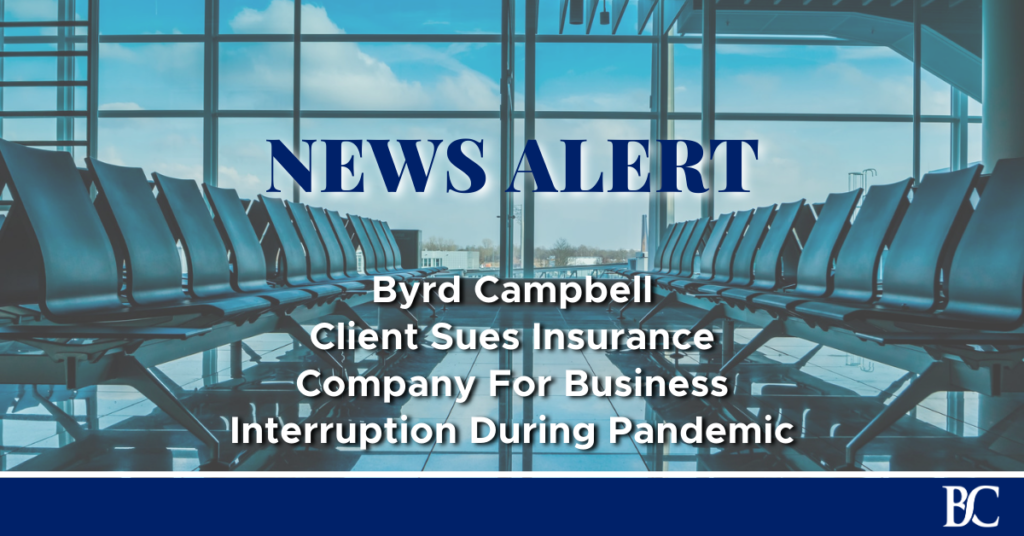 Villa Enterprises, an operator of concessions at Orlando International Airport, has filed a lawsuit in Orlando federal court against its insurance company, claiming losses from the COVID-19 pandemic should be covered in a case that could resonate throughout the business world.

The New Jersey-based company, which operates hundreds of food hall locations nationally, contends that government-mandated closures and other measures used to halt the spread of the coronavirus caused an interruption of business similar to any other disaster that would be covered. The lawsuit, filed in January, covers all of Villa’s businesses, not only its interests at OIA.

“As a result of those closures, my clients suffered a catastrophic impact to their business,” said Tucker Byrd of the Winter Park firm Byrd Campbell, which is representing the plaintiffs.

Charter Oak Fire Insurance Company, under the umbrella of Travelers Insurance, declined to comment for this story.

Biago Scotto, owner of Villa Enterprises, said it’s situations such as these that he’s been paying insurance for.

“The point of insurance is to cover things that are unforeseen,” Scotto said. “We suffered a major blow in 2020, and we’re still suffering from it.”

Villa runs the food court in Terminal A near Southwest Airlines, with five fast-food stands including a Jersey Mike’s and a Chipotle. More than 300 employees were affected at the Villa’s airport operations, according to Scotto, from layoffs to reduced hours. Companywide, that number grows to 3,000.

Villa alleges in the lawsuit that government mandates may have resulted in the “curve” of coronavirus cases being “flattened, but so too was Villa’s business.” The suit claims “tens of millions of dollars in damages.”

An exact amount for damages is still being tabulated “and grow each month,” according to Byrd, but could “easily reach eight figures.”

Villa is not the first company to file such a lawsuit during the pandemic.

“It’s been a mixed bag” as far as rulings, said Scott Godes, an attorney for the Washington-based firm Barnes & Thornburg. Godes was an author on a story about business interruption insurance claims for The National Law Review last year.

“On early cases, the judges agreed with the insurance companies that there was no physical damage,” Godes said. Many policies require such damage for coverage.

However, some judges have begun interpreting the language in “all risk” policies such as Villa’s as ambiguous.

“A bedrock principle is if there is more than one way to reasonably read something, you find against the [insurance company],” Godes said.

In a case in North Carolina last year, North State Deli and other restaurants who filed suit together were awarded a partial summary judgment by Superior Court Judge Orlando F. Hudson Jr., who read the closures as a covered loss.

In Florida, a judge denied an insurance company’s motion to dismiss a lawsuit brought by an Urogynecology Specialist of Florida on the same merits.

“There are certainly bright spots for policyholders in this landscape,” Godes said.

Godes acknowledged cases such as these could have a potential “domino effect,” leading to precedents that influence future cases for other businesses seeking claims.

The union Unite Here, which represents several concessions providers at OIA though not Villa, estimates nearly 2,000 employees have lost their jobs in the pandemic.

Scotto said the insurance payouts are needed for employees to come back.

“Even today, the full business isn’t back,” he said. “We are suffering from a lack of passengers and a lack of travel.”