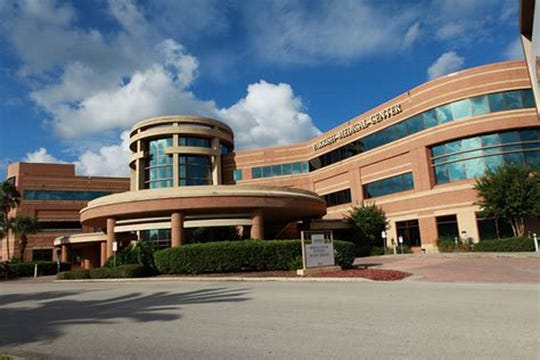 An email with a headline-grabbing subject line – “Media Alert: Health Care Fraud in Brevard County” – began appearing in inboxes from Titusville to Palm Bay on Aug. 27.

The email purported to be from Dr. Craig Deligdish, president of OMNI Healthcare, a physician who has a tangled and litigious history with Health First. But the target of this email wasn’t Brevard’s healthcare giant; it was its smaller competitor, Parrish Medical Center, with whom OMNI has a relationship.

The email sent to local officials and media contained a PDF on the letterhead of a company, Lo Tignov, that investigates medical fraud. Deligdish serves as its chief medical officer. The PDF accused Parrish CEO George Mikitarian, Parrish Vice Chairman Robert Jordan and Parrish board member Stanley Retz of using their positions on the North Brevard Economic Zone for their own personal financial benefit. It said the trio participated in the group’s meetings despite Parrish’s plans to construct within the zone and enriched the value of land they owned during their tenure.

Deligdish reported the email to police as identity theft.

Melbourne Police say they are investigating the email as potential identity fraud.

And while neither Deligdish nor the Parrish officials would say publicly who they think is behind the email, FLORIDA TODAY obtained emails indicating that Deligdish accused Health First.

The reason: the document’s metadata – the information stored inside the code of a document recording the author, time created and other details when a document is saved – identifies the creator as Joe Boutin. Boutin is the CEO of 321 agency, an advertising firm that represents Health First. A FLORIDA TODAY examination of the metadata found another name hidden in the information: Matthew Gerrell, Health First’s senior vice president of strategy.

University of South Florida cybersecurity instructor Jason Lewis confirmed FLORIDA TODAY’s findings but also pointed out that metadata can be easily manipulated by someone who knows how.

That said, Lewis added that he’d “bet a month’s salary that the email is fraudulent,” citing the use of a Gmail address rather than the email listed on Lo Tignov’s website and grammatical errors in the PDF that don’t appear on the website.

Health First spokesman Pat Guerry denied that Health First or any of its vendors produced or distributed the email and said accusations of Health First’s involvement were part of a “comprehensive strategy to set us up for civil litigation.” He also accused Deligdish of “(continuing to) harass and disparage our fine organization.”

“When healthcare professionals fight, no one wins,” Guerry wrote. “Our hope and desire is that these aggressive allegations towards us will end, and turn this energy to helping Brevard.”

Deligdish was among a group of physicians and medical groups with whom Health First settled an antitrust lawsuit in 2016.

“In the unlikely event law enforcement opens an investigation I will respond to them,” Eisenmenger said. “In the meantime, I will treat Dr. Deligdish’s accusations with the respect they currently deserve and withhold further comment.”

Melbourne Police say investigators have yet to interviewed suspects or witnesses because the investigation is in its early stages.

The letter is among several recent mysterious, disparaging attacks against Deligdish. A letter was sent to the Florida Bar on July 31 under Parrish’s name accusing Deligdish of unlicensed practice of law. It bore the signature “Parrish Medical Center Staff.”

Joseph Zumpano, an attorney who represents Parrish, wrote in a letter to the Florida Bar that the complaint was a forgery unauthorized by Parrish.

“Apparently, both Deligdish and PMC have been victims of identity theft … Obviously, these forgeries constitute issues upon with law enforcement agencies may act further,” Zumpano wrote to the bar.

Deligdish wrote to the bar saying that advertisements included in the complaint were forgeries made with altered information from his website. The fliers displayed the sentence, “We will pursue the case ourselves should the (Department of Justice) decide not to,” in large, bold, italicized capital letters. Lo Tignov is not licensed to pursue cases itself, the complaint pointed out.

Hostilities between the major institutions have been a hallmark of Brevard’s healthcare market. Health First’s opponents have argued in court that the healthcare organization has used coercion and kickbacks to convince its physicians to refer only within its network, expanding its control of the market. Multiple plaintiffs have argued that physicians who don’t comply are blackballed and lose access to Health First’s expansive system.

Health First has repeatedly denied the allegations, characterizing the suits as frivolous distractions from its greater mission of providing quality healthcare.

Damaging the reputations of Parrish board members could strike a critical blow to the North Brevard healthcare organization, said Steven Ullman, chair of the Department of Health Management and Policy at University of Miami. Hospitals rely on reputation to succeed in the healthcare market.

“Unlike selling soda or books or whatever, in healthcare you’re selling one thing, and that’s trust,” said Ullman. “When trust is being questioned, it can really impact the healthcare business.”

If the reputations of OMNI and Parrish are damaged, a competitor could stand to gain ground.  Parrish is still engaged in a legal battle with Health First, having sued the organization in 2015 for a contract dispute and accused Health First of creating an illegal healthcare monopoly.

“It is regrettable that Parrish Medical Center and others have been victimized and damaged by these wrongful acts, and Parrish Medical Center declines to comment further at this time out of respect for the ongoing efforts to obtain justice,” Parrish’s lawyer, Zumpano, wrote, referring to the allegations in the email.

Jordan, Cole and Fisher have filed a defamation lawsuit in Brevard County’s circuit court. The suit is filed against “John Does 1-10,” but lawyer Tucker Byrd wrote in the suit that he intends to subpoena 321 agency, Boutin, Gerrell and Health First in an effort to discover information that will identify the perpetrators.

“The allegations are not only false, they are maliciously false,” Byrd wrote. “We are pursuing legal action to bring the cowards who hid behind someone else’s identify to get not just justice, (but) to get a legal reckoning.”

Bailey Gallion is the business and development reporter for FLORIDA TODAY. Contact Gallion at bgallion@floridatoday.com or 321-242-3786