Skip to content
Home/News/Coronavirus: Part I – “Act of God?” or “Oh my God!”
Previous Next 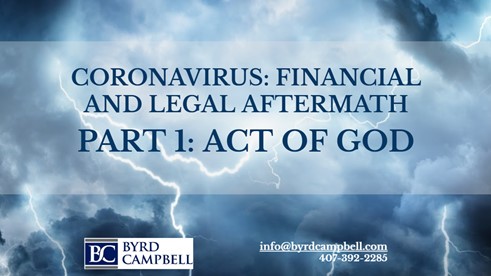 CORONAVIRUS:  THE FINANCIAL AND LEGAL AFTERMATH

As the world wrestles with the medical and social issues of how to deal with the COVID–19 pandemic, the legal and financial aftermath looms perhaps even larger. Eventually, medicine, governmental intervention, and the public spirit will defeat the disease hopefully within weeks or months, but the effects on our lives, businesses, and investments could last considerably longer.

Byrd Campbell—whose motto “Byrd Campbell Means Business” embodies our mission—is a law firm dedicated to serving businesses.  Already our clients have raised concerns about the unfolding but unfathomable consequences of how COVID–19 has turned or will turn their business lives upside down.  Over the coming days, the firm will publish a series of blog posts addressing those issues looming on the horizon, identifying the points of consideration, and offering possible solutions.

DOES THE PANDEMIC CONSTITUTE AN “ACT OF GOD,” WHICH COULD EXCUSE CONTRACT PERFORMANCE?

Contract law recognizes a legal excuse for not performing on a contract when an intervening event which materially and adversely affects a party’s ability to perform, commonly called an “Act of God,” occurs. This does not refer to a theistic event. Rather it refers to a simple concept that when a party’s performance cannot possibly occur because of a reasonably unforeseeable or unpredictable event, that party’s nonperformance should be excused. This label, though, harkens to the basic philosophy that some things occur beyond the comprehension or contemplation of man.  The colloquial phrase “Sh*t Happens,” popular in today’s culture, speaks to the idea that sometimes, in a random way, life presents us surprises, but when that happens, does it free us from our contractual promises and obligations?  Well, it depends.

The label “Act of God” has become associated with a trio of common law defenses to contracts:  impossibility, impracticability, and frustration, which trace their origins to England.  In the seminal case of Taylor v. Caldwell, the English court excused an event organizer from a contact to rent a music hall after the venue burned down. (1863) 122 E.R. 309.  Because the purpose of the contract had been frustrated in that the existence of the venue was implied, the perishing of the “thing” excused the parties from having to perform.  The United States Supreme Court adopted a similar rule to excuse a ship owner from having to deliver freight after the ship had been damaged in a fire. See The Tornado, 108 U.S. 342 (1883). 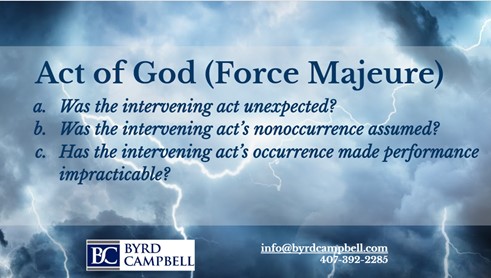 In practical terms, the applicability of the defense requires a detailed examination of the facts.  The analysis typically focuses on the contemplation of the parties entering the contract. For example, a party contracting to ship goods through the Strait of Hormuz reasonably might contemplate a greater risk of a terrorist attack than a party shipping freight down the Mississippi River.  At the core of this analysis, courts will consider the general fairness to the parties, and the risks they reasonably should have anticipated.  The circumstances may impair, but not prohibit, one party’s performance, but do they make it unreasonably more burdensome to perform, i.e., impracticable, such that they should be allowed to walk away without consequence?

The occurrence of a pandemic presents a perfect example of the issues to be sorted out by the courts.  Should parties have anticipated a possible viral outbreak?  Certainly, we have experienced them before, particularly coming from Asia.  And after the COVID-19 event, one can no longer say, “It couldn’t happen!” because it now has (all the more considering the relatively recent SARS, MERS, and H1N1 outbreaks). Even if the viral outbreak were unanticipated, has the impact been so severe that a party’s ability to perform has been unfairly impaired?   With our advanced ability to detect and predict the impact of a meteor, no doubt we may have to address whether a meteor strike constitutes an “Act of God” at some point, assuming we are still around to worry about it.

The interplay between an Act of God defense and the defending party’s “business interruption” insurance may present an intriguing argument.  If a party has “business interruption” insurance against a calamity, and the insurance coverage addresses (usually through an exclusion in the policy) a pandemic, can that same party trying to assert an “Act of God” defense to escape a contract with a third party, claim to have not contemplated the existence of the pandemic?

To remove uncertainty about the effect of “uncertain” events on the parties’ duties to perform, parties have resorted to writing express exclusions into their contracts for the so-called “Acts of God,” or as known by their formal name, “Force Majeure” events.  This paradox of trying to anticipate and thus specify those events—which should be unanticipated enough to excuse performance—traditionally was done by stating generally that a party’s performance could be excused for an “Act of God.”  Over time, though, parties, to impose greater protections, have resorted to describing in greater detail those events which would excuse a party’s performance, such that the exceptions have swallowed up the general rule.

However, by overly describing those events which excuse performance, the contract may create more exposure, not less.  When every eventuality imaginable is listed, a reasonable argument could be made that any event not listed, albeit extraordinary, might not provide a defense.  Applying the rule of contract construction expressio unius est exclusio alterius, when one or more things of a class are expressly mentioned, others of the same class are excluded.  By trying to be exhaustive in the list of exclusions, you might be accepting unnamed risks by implication.

The occurrence of the coronavirus pandemic will undoubtedly test the application of force majeure clauses.  If the contract delineates an exhausting list of excuses to performance, but does not specifically mention the coronavirus, has it intentionally been excluded, and thus the risk of its occurrence accepted by the parties?  Some courts have adopted a rule that force majeure clauses must specify those events to be excluded and rejected more general classes of risk.

It is said, “What you don’t know can and will hurt you.”  Defenses to contracts, whether by common law principles or force majeure clauses, may provide some measure of protection from these unknowns.  The extent to which an “Act of God” excuses a party’s performance depends upon the language of the contract and the circumstances presented.  But just as you should not try to diagnose your own illness, you should not diagnose your own contract. Seek the advice of legal counsel.   Then you may know.