Skip to content
Home/News/Who Ya Gonna Call?
Previous Next

Who Ya Gonna Call? 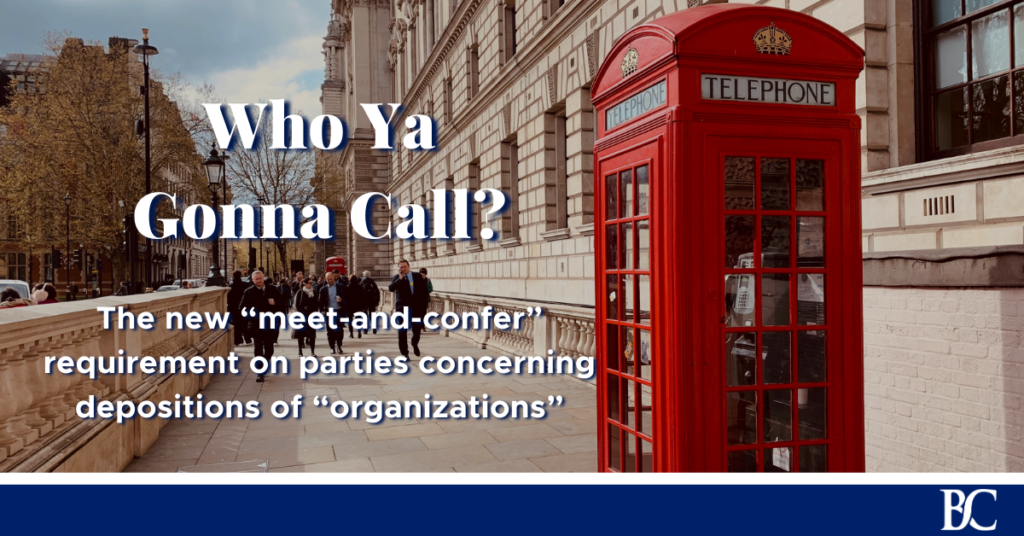 Who Ya Gonna Call?

No, I am not talking about Ghostbusters! I am talking about the recent amendment to Federal Rule of Civil Procedure 30(b)(6) which imposes a new “meet-and-confer” requirement on parties concerning depositions of “organizations.”

Effective December 1, 2020, the amendment to Rule 30(b)(6) attempts to curtail discovery abuses prevalent in the taking of such entity depositions, a procedure by which a party may take the deposition of a “public or private corporation, a partnership, an association, a governmental agent, or other entity” by describing “with reasonable particularity the matters for examination.” Many a discovery fight has been waged over the description of matters for examination and whether the deposed entity has reasonably complied by designating and making available the person to testify about the matters. This amendment aims to curb those fights.

The amendment simply states, “Before or promptly after the notice of subpoena is served the serving party and the organization must confer in good faith about the matters for examination.” In other words, the parties should endeavor to agree on the scope of the request so the examined party can designate the correct person who will testify about those topics.

The Supreme Court has adopted various discovery rules to curb abuses. For example, the requirement for parties to make “initial disclosures” under Rule 26 imposed a duty on parties to be forthcoming with relevant discovery early in litigation.

Litigation, particularly discovery, should not be a blood sport. Truth, candor, and fairness in advocacy should be the goal. This amendment to Rule 30(b)(6) represents another step toward that goal.