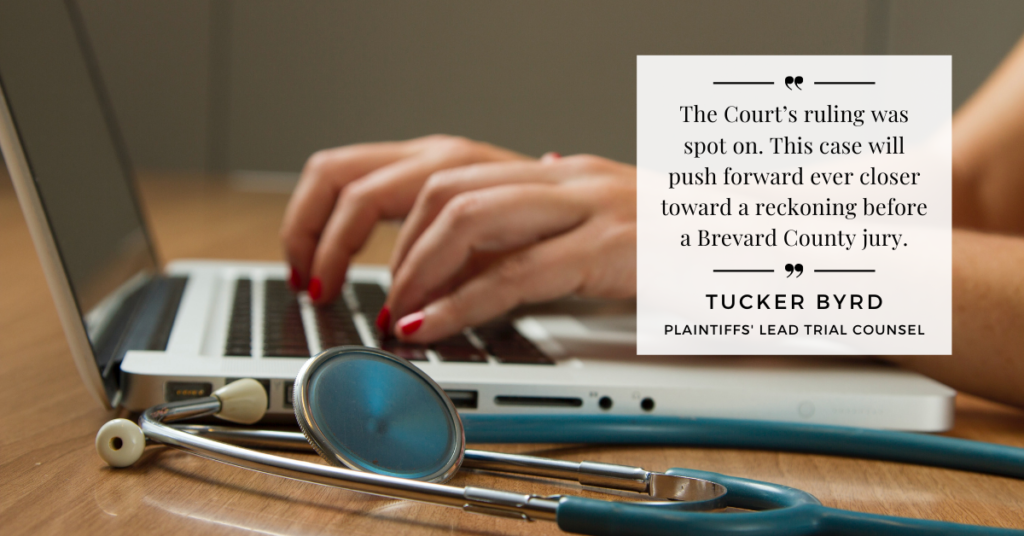 A libel lawsuit against Health First Inc. by three prominent local businessmen will go forward and could be headed for a jury trial next year after Circuit Court Judge Curt Jacobus Tuesday denied motions by the health care provider to dismiss the case.

At the center of the lawsuit are claims by the businessmen — Herman Cole, Robin Fisher and Robert Jordan Jr. — that Health First libeled them in a fake email as part of an effort to undermine rival health care company Parrish Medical Center.

The email in question implied that Cole, Fisher and Jordan and their businesses improperly benefited financially from their connections with Parrish. The lawsuit claims that the businessmen were “civilian casualties” in what was described as Health First’s “relentless health care war” against Parrish, whom the businessmen served.

At the end of an hourlong court hearing in Viera, Jacobus denied various legal arguments raised by three attorneys representing Health First and three co-defendants, who were seeking to dismiss the lawsuit.

The judge indicated that he wanted to see the case move forward without more requests for dismissal.

“I just don’t want the back-and-forth game-playing,” Jacobus said. “If I feel like there’s game-playing, it’s not going to be fun.”

In a statement issued after the hearing, Health First said: “Health First denies all allegations, and will continue to vigorously defend itself in court.”

The lawsuit describes Cole, Fisher and Jordan as “three of the most prominent and highly respected African American business and civic leaders in Brevard County.” Cole and Jordan have served on Parrish’s hospital board.

Jordan is a former Brevard School Board member, and is president and CEO of Genesis VII, an engineering, logistics and construction services company. He also serves on the Titusville City Council and previously served on the North Brevard Economic Development Zone board.

Cole is a retired Air Force colonel. Cole and Fisher jointly own Colefish Investments Inc., a company that owns real estate in Titusville.

Fisher is an insurance agency owner, a former Brevard County commissioner, and a former member of Palm Bay and Titusville city councils

The original lawsuit listed unnamed “John Does Nos. 1-10” as the defendants, but the lawsuit was amended in January 2020 to include the names of the current defendants.

According to the lawsuit, the defamatory statements were contained in an Aug. 19, 2019, email that was sent to a number of community leaders and news media outlets. According to the lawsuit, the email was made to look like it was written by Dr. Craig Deligdish, an oncologist affiliated with Parrish, who is president and CEO of Omni Healthcare. But it really was generated by people with connections to Health First, the suit alleges.

“Defendants Health First and its cohorts intentionally targeted the plaintiffs because their prominence through the minority community, and far beyond, through the entire Space Coast region, reflected positively on Parrish Hospital,” the lawsuit alleges.

The lawsuit alleges that the email’s “metadata” indicated that Boutin and Gerrell were involved in writing the PDF that was attached to the letter. Metadata is a chunk of code created when a document is saved, and includes details such as time created, file type and author.

Matthew Gerrell is one of four defendants in the lawsuit. Gerrell is senior vice president of strategy for Health First and chief executive officer of Health First Health Plans.

“It’s like they left the weapon at the scene of the crime,” Tucker Byrd, an attorney for plaintiffs Cole, Fisher and Jordan, told the judge.

Judge Jacobus did ask Byrd to modify his lawsuit to include a full copy of the letter that is at the center of the case, rather than just excerpts, as well as to detail the specific damages suffered by each of the three plaintiffs. Both are issues the defense attorneys raised in their legal arguments.

During the hearing, Byrd noted that the attorneys for the defendants, during their 40 minutes of legal arguments, did not once indicate to the judge that their clients were innocent of the allegations.

But Health First attorney James Fallace responded that “we’re here on a motion to dismiss,” and to argue the merits of the case itself would be inappropriate in this venue.

“I’m glad Mr. Byrd has tried this case in his head,” Fallace said.

Byrd said after the hearing that “we feel great about the ruling” from Jacobus.

Byrd said he is looking forward to moving the case to trial, bringing the defendants and other witnesses to questioning under oath.

“We’ll find out who did what and how they did it,” Byrd said.

Byrd estimated that the trial would begin about one year from now.